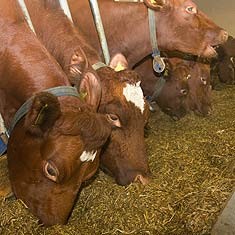 The establishment of farm co-ops, - member-owned organisations that maximise membership benefits, has been a very common practice in Norway. There are currently 15 organisations affiliated with the farm co-op system, and they specialise in either sales, purchasing or breeding. The 50,000 farmers in Norway today own these co-ops. Altogether, the Norwegian farm coops account for an annual turnover of roughly NOK 69 billion. FK is the largest purchasing co-operative, and the third largest farm co-op organisation, ranking right after the dairy and meat cooperatives.

FK is the primary supplier of equipment to Norwegian farmers. Its paramount goal is to improve members' economies in the short and the long term through the purchase, sale and distribution of equipment, consumer goods and agricultural services. It is hoped that members will experience FK as an efficient, profitable organisation that will be their natural partner of choice when they need to buy equipment.

FK's primary sphere of activity is the production of feed concentrates, which forms the very backbone of FK's activities. With a market share of 48 per cent, comparable to 0,9 million tonnes of feed concentrates, the organisation is the single largest player in the Norwegian feed concentrates market. Feed concentrate sales account for 30 per cent of FK's total operating revenues. FK has 13 production facilities of its own, and co-operates closely with local mills. FK produces feed concentrates for ruminants, swine, poultry, horses, fur-bearing animals, dogs and cats. FORMEL, FORMAT, KROMAT, CHAMPION, Labb, Appetitt and Matmons are the brand names used for the various categories of animals.

Norske Felleskjøp have, on behalf of the government and the Norwegian farmers, the responsibility to regulate the Norwegian grain market. The main purpose of this regime is to secure farmers the price agreed in the agricultural negotiations.

FK is Norway's single largest farm implement dealer, with a 36 per cent share of the market. The sale of farm implements accounts for 25 per cent of FK's operating revenues, meaning it ranks right after feed concentrates as a source of income for FK. Every fourth tractor sold in Norway was a John Deere purchased from FK. The organisation carries a wide selection of equipment in order to satisfy the various wants and needs of its members.

FK has 103 FK stores/departments located all over Norway to sell and distribute equipment to members and other buyers. The departments have workshops that overhaul and repair tractors, farm implements and machinery, in addition to roving service vehicles that allow FK mechanics to make 'house calls'. FK also engages in comprehensive advisory and training activities for members, elected officers and employees. As far as advisory services are concerned, queries are fielded by clerks, specialists, various committees or corporate-level consultants.

The regional units have established joint ventures and functions to promote the paramount goal of improving members' economies in the short and the long term.

is the collective enterprise that safeguards the organisational and industrial policy interests of the co-operatives, in addition to helping develop and co-ordinate strategic and business collaboration among the co-ops themselves. Further, Norske Felleskjøp represents FK in different contexts: in terms of industrial policy, for example, in dealing with the farmers' unions and the authorities and, in terms of partner organisations, for example, in dealing with The Federation of Norwegian Agricultural Co-operatives and Intercoop Europe, as well as in other situations in which it is natural for FK to be represented along with other organisations.
Norske Felleskjøp has, on behalf of the government and the Norwegian farmers, the responsibility to regulate the Norwegian grain market. The main purpose of this regime is to secure farmers the price agreed in the agricultural negotiations.

is FK's joint venture for research and the development of new feed products for livestock.

FKA: Felleskjøpet Agri www.felleskjopet.no
The largest company covers most of Norway from Larvik in the south to the Russian border in the north east.